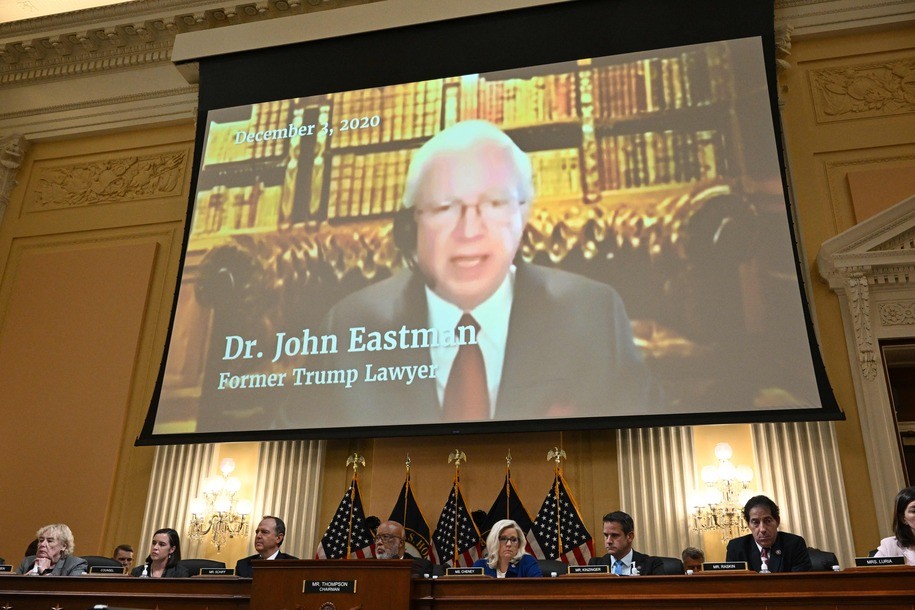 Eastman’s role in the coup plot was to take what had been called “the Pence card,” a claim that Pence could interfere in the reporting of votes from electors that took place on Dec. 14, and refit this into a last ditch effort around the reporting of those votes on Jan. 6. To do this, Eastman met with Donald Trump and members of Trump’s campaign and legal teams and worked through a plan by which Pence would simply throw out the vote in seven states won by Biden. To support this, Eastman, Trump, and other members of his team worked to convince Republicans in those states to form slates of false electors who could then be used to support the idea that these states were “in dispute.” Trump would then be named the winner in holding the majority of votes in the 43 states that remained.

Clark’s job was to bring the DOJ in on the side of supporting this scheme. To do this, he worked directly with Trump to come up with a plan where he would replace acting Attorney General Jeffrey Rosen and send out a letter indicating—falsely—that the department was investigating serious evidence of election fraud. Clark was thwarted in his scheme by a last-minute uprising among DOJ leadership, who recognized that he was in no way qualified to lead the agency, and by public revelations of Trump’s attempts to pressure Georgia Secretary of State Brad Raffensperger, which threw a monkey wrench into a memo Clark had already pre-written specifically claiming evidence of fraud in Georgia.

The first question that springs to mind when considering either the seizure of Eastman’s phone, or the search of Clark’s property is … what took so long? Fifteen months after the assault on the Capitol, is it reasonable to believe that either man has failed to dispose of evidence that would show their roles in delivering a violent mob to Congress with the intention of pressuring Pence and lawmakers into overturning the election? Apparently the DOJ believes it’s still worthwhile.

When it comes to Eastman’s records, there may not be a whole lot to read into his dropping the suit. Eastman lost the court fight to protect a whole series of his records back in January. The court then ordered Eastman to turn over records in February, though Eastman was clearly slow-walking that delivery so that it would take months. The fact that the select committee has Eastman’s memos describing “the January 6 scenario” reflects that much of the material from these subpoenas has been provided. Having gotten its hands on Eastman’s written material, and with the DOJ having subpoenaed the false electors, it’s not clear there’s anything of interest left to find on Eastman’s phone.

Though it would certainly be interesting to see confirmation of the calls Eastman made to White House staff, his text pressing Mark Meadows to continue with the conspiracy even as the assault on the Capitol was underway, his post-Jan. 6 efforts to secure a pardon, and perhaps most of all details of his communications with Virginia Thomas, wife of Supreme Court Justice Clarence Thomas.

For Clark, it’s not clear exactly what else there is to know. Details of his plot to replace Rosen have been known since just two weeks after the Jan. 6 events. That includes memos that went back and forth between Clark and the White House, at least two private meetings with Trump, a meeting in which Rosen and the deputy attorney general made it clear that appointing Clark would result in a revolt within the DOJ, and even notes from Rosen that Clark generously offered to let him stay on as an assistant after Trump handed over the department.

Neither Clark nor Eastman was in any sense stealthy. Because they expected their coup to work.

Of all the people involved in the conspiracy, Eastman and Clark may be the easiest to tackle for a couple of simple reasons. First, they have no power. Clark may have landed a job in the Republican welfare system of “institutes” and “foundations,” and Eastman may have been around the GOP block from anti-gay groups to anti-immigrant groups, but neither really has any pull when it comes to elections or fundraising. Second, no one likes them. Both were late additions to Trump’s election scheme, brought in specifically after other options had fizzled. Eastman doesn’t seem to have made any friends among Trump’s team with his hectoring texts and memos. Clark’s deal has all the aspects of a classic quid pro quo, with the unqualified environmental lawyers seeking to advance several undeserved levels in exchange for throwing the election into chaos.

As Rebekah Sager reported last week, insiders have been indicating that Eastman could be one of the first people Trump is willing to throw under the bus if it seems like charges are looming. “Johnny does not have many friends in [the upper crust of] Trumpworld left,” said one source, “and most people loyal to the [former] president are fine with him being left out on his own, to deal with whatever consequences he may or may not face.”

With that in mind, there’s some possibility that Eastman may have decided to jump before he was pushed, and to provide evidence against Trump. After all, no matter how important it may be to hang charges on the man who wrote a detailed step-by-step plan for overthrowing the government, and who was still calling people encouraging them to go along even as the attack was underway … it would still be better to get Trump.

As The New York Times reports, Garland seems to have handed off the cases of both Eastman and Clark to U.S. attorney Thomas Windom. Windom, reportedly working closely with Garland, has been “working from the periphery of the events inward.” But now Windom has reached Clark and Eastman.

In recent weeks, the focus has shifted from collecting emails and texts from would-be electors in Georgia, Arizona and Michigan to the lawyers who sought to overturn Mr. Biden’s victory, and pro-Trump political figures like the head of Arizona’s Republican Party, Kelli Ward.

The investigation has been closing, slowly, starting with the small fish, working toward the center. He’s gone before the Grand Jury with information on the people involved in the Stop the Steal rally. He’s worked to see the Proud Boys facing charges of seditious conspiracy. With Eastman and Clark in the net, there aren’t a whole lot of bigger targets left to collect.

For everyone who has fretted while the Justice Department indicted one minor player in Jan. 6 after another, wondering when things would get serious … they’ve gotten serious.

And it’s no likely they saved these guys for last only to give them a slap on the wrist.