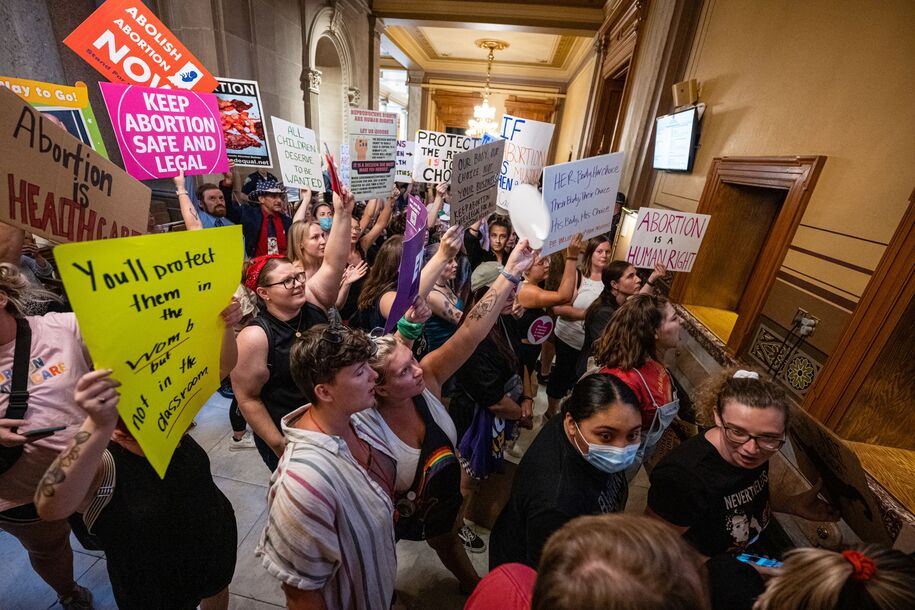 Publicly, most prominent Republicans say it’s not that they’re avoiding abortion; it’s that they’re sticking with the real issues of concern to voters. Except that high turnout in Kansas for a normally low-turnout primary election shows that voters are concerned about abortion. Privately, some Republicans admit that they may have a problem, with one telling The Washington Post that Kansas should “send a cold chill up the spines” of many Republicans.

”The base of the GOP is definitely ahead of where the voters are in wanting to restrict abortion,” an Iowa Republican operative told The New York Times. “That’s the main lesson of Kansas.” No kidding. A New York Times analysis extends the Kansas vote across the country in an estimate using state demographics, suggesting that voters in around 40 states would vote to protect abortion rights.

“My advice would be for Republicans to stick with their winning messages about the runaway costs of inflation and energy costs and continue to largely avoid discussing the abortion debate,” one Republican communications strategist told Insider, in a view echoed by another Republican strategist. The problem for them on that front is that gas prices are dropping—and Kansas showed that people really do care about abortion rights. It will be easier to change the subject as voters consider the totality of a candidate rather than a single issue, but predictions that abortion would not drive turnout are clearly wrong.

Some Democrats are urging their party to seize on the issue. “The energy is on the side of abortion rights,” Sen. Brian Schatz said. “For decades, that hasn’t been true, so it’s difficult for some people who have been through lots of tough battles and lots of tough states to recognize that the ground has shifted under them. But it has.”

“The Republicans who are running for office are quite open about their support for banning abortion,” according to Sen. Elizabeth Warren. “It’s critical that Democrats make equally clear that this is a key difference, and Democrats will stand up for letting the pregnant person make the decision, not the government.”

Happily, some key Democratic leaders are getting the point, too. “It’s a game changer,” Democratic Congressional Campaign Committee Chairman Sean Patrick Maloney told The Washington Post. “Kansas is the earthquake that is going to rattle every assumption about what is going to happen this fall.”

As Warren pointed out, Republicans can only run so far away from the issue, given extremist candidates like Doug Mastriano in Pennsylvania and Tudor Dixon in Michigan, both of whom have said they oppose exceptions for rape and incest in abortion bans. But even Republicans who might rather downplay it now have a history. Their positions are not hard to identify, their role in overturning Roe is not hypothetical, and the threat of a federal abortion ban is real.

Democrats have pulled even in generic ballot polling after having trailed Republicans throughout 2022. Whether you call it the ground shifting or an earthquake or a game changer, the course of action is clear: Take advantage of the momentum shift.

Arizona Sen. Mark Kelly is out with an ad letting voters know what Republican nominee Blake Masters believes on abortion, and in Michigan:

Abortion rights, gun safety, and the our planet are all at stake in this election. We must persuade Democratic voters to turn out in November. Click here to volunteer with Vote Forward and write personalized letters to targeted voters on your own schedule from the comfort of your own home, without ever having to talk to anyone.

Never forget this: Republicans own the end of Roe

About that national abortion ban congressional Republicans have been planning …