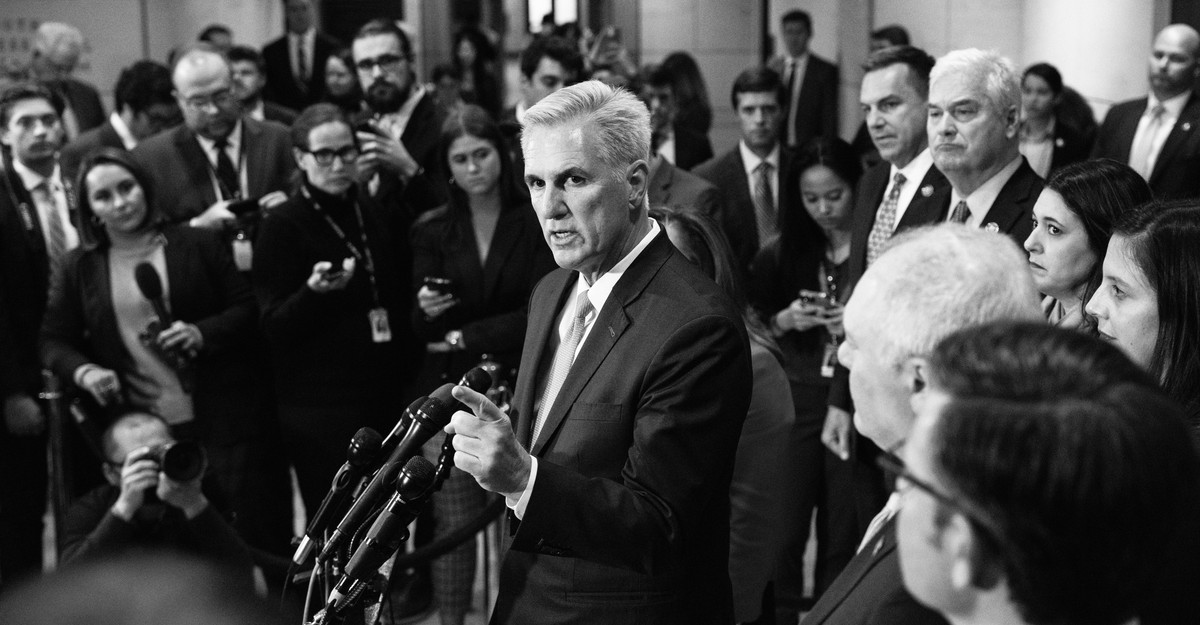 The list of investigative priorities for the House Judiciary Committee that the incoming chairperson, Jim Jordan, sent to the Justice Department earlier this month reads like an assignment sheet for Fox News.

And that was before Jordan, with incoming House Oversight and Government Reform Committee Chair James Comer, repeatedly insisted the FBI had colluded with “Big Tech” to undermine former president Donald Trump by “suppressing” information about Hunter Biden’s laptop prior to the 2020 election.

It was also before reports surfaced that Kevin McCarthy, in his bid to secure the votes as speaker, promised far-right members of his caucus that he would authorize investigations into the Justice Department’s treatment of the insurrectionists who rioted in support of Trump on January 6. This was also before McCarthy threatened to launch impeachment proceedings against Department of Homeland Security Secretary Alejandro Mayorkas.

Two months before taking power, the new House Republican majority has signaled that its investigative agenda will channel the preoccupations of the former president and his die-hard base of supporters. But it has set this course immediately after a midterm election in which voters outside the core conservative states sent an unmistakable signal of their own by repeatedly rejecting Trump-backed candidates in high-profile senate and gubernatorial races. That contrast captures why the GOP’s plans for aggressive investigations of President Joe Biden may present as much political risk for the investigators as it does for the targets.

House Republicans and their allies are confident that the investigations will weaken Biden in advance of the 2024 presidential election. “This is not just superficial stuff—this is damaging stuff,” former Republican Representative Tom Davis, who chaired the National Republican Congressional Committee, told me.

But the new majority’s focus on airing echo-chamber conservative obsessions risks further stamping the GOP as the party of Trump precisely as more Republican leaders and donors insist the recent election results demonstrate the need to move beyond him.

“All these folks are coming out saying, ‘Turn the page; move forward’ … and I think this is really a problem if some of these [House] members are going to continue to look back and embrace Trump at a time when we saw the most Trumpian candidates get their heads handed to them,” former Republican Representative Charlie Dent told me.

The choices confronting GOP leaders on what—and how—to investigate encapsulates the much larger challenge they will face in managing the House. This month’s midterm election left the GOP with a House majority much smaller than it expected. The results also created a kind of split-personality caucus operating with very different political incentives.

Most incoming House Republicans represent districts in Trump country: 168 of them hold seats that Trump won by 10 percentage points or more in 2020. Another three dozen represent more marginal Republican-leaning seats that Trump carried by fewer than 10 points two years ago.

But the GOP majority relies on what will likely be 18 members (when all the final votes are counted) who won districts that voted for Biden in 2020. Eleven of those 18 are in New York and California alone—two states that will likely become considerably more difficult for Republicans in a presidential-election year than during a midterm contest.

For the Republicans from the hard-core Trump districts, demonstrating a commitment to confronting Biden at every turn is crucial for preempting any possible primary challenges from their right, says the Democratic consultant Meredith Kelly, a former communications director at the Democratic Congressional Campaign Committee. But, as Dent told me, the Republicans precariously holding the Biden seats have the “polar opposite” incentive: “They need to have bipartisan victories and wins.”

Amid that cross-pressure, many analysts second the prediction of outgoing Democratic Representative David Price of North Carolina, a political scientist who has written several books about Congress, that the new GOP House majority is not likely to pass much legislation. The problem, Price told me, is not only the partisan and ideological fracture in the GOP caucus, but that its members do not have “an agenda that they campaigned on or they are committed to.”

All members of the GOP caucus might agree on legislation to extend the Trump tax cuts, to promote more domestic energy production, or to increase funding for border security. But resistance from the Republicans in blue and purple districts may frustrate many of the right’s most ambitious legislative goals, such as repealing elements of Biden’s Inflation Reduction Act, passing a national ban on abortion, and forcing cuts to Social Security and Medicare.

With their legislative opportunities limited, House Republicans may see relentless investigation of Biden and his administration as a path of least resistance that can unite their caucus. And, several observers in both parties told me, all sides in the GOP are likely to support efforts to probe the White House’s policy record. Such targets could include the administration’s handling of border security, the chaotic withdrawal from Afghanistan, and how it is allocating the clean-energy tax credits and loan guarantees that the Inflation Reduction Act established.

But Republicans have already indicated they are unlikely to stop at such conventional targets.

Jordan, in his letter to Attorney General Merrick Garland earlier this month, warned of coming investigations into the Justice Department’s treatment of Project Veritas; allegations that the department has targeted conservative parents as “domestic terrorists” for their actions at school-board meetings; and the department’s decision making in the choice to execute a search warrant at Mar-a-Lago.

At the press conference last week with Jordan, Comer declared that evidence from the GOP’s investigation of Hunter Biden’s business activities, including information obtained from his laptop, “raises troubling questions about whether President Biden is a national-security risk.”

Jordan, asked at that press conference about the reports that McCarthy has committed to an investigation of the prosecution and treatment of the January 6 rioters, refused to deny it, instead repeating his determination to explore all examples of alleged politicization at the Justice Department. At one point, Jordan, an unwavering defender of Trump through his two impeachments, delivered an impassioned attack on federal law enforcement that reprised a long list of familiar Trump grievances. “When is the FBI going to quit interfering with elections?” Jordan excitedly declared.

Jordan doesn’t even represent the outer edge of conservative ambition to use House investigations to settle scores for Trump. Earlier this week, Representative Matt Gaetz of Florida tweeted that when Republicans take the majority, they “should take over the @January6thCmte and release every second of footage that will exonerate our Patriots!”

That might be a bridge too far even for McCarthy. But as he scrambles to overcome conservative resistance to his bid for speaker, he has already shown deference to demands from the Trump-country members who constitute the dominant block in his caucus. One example was the report that he promised Representative Marjorie Taylor Greene that he would allow some investigation into treatment of the January 6 rioters. Another came in his appearance along the Texas border this week. McCarthy went beyond pledging oversight of the Biden administration’s border record to raise the much more incendiary (but also Fox-friendly) notion of impeaching Mayorkas.

Dent, the former GOP representative, told me that on all these fronts, House Republicans risk pushing oversight to a confrontational peak that may damage its members from marginal seats at least as much as it hurts Biden—particularly if it involves what he described as airing Trump grievances. “These rabbit holes are just fraught with political peril in these more moderate districts,” Dent said.

Democrats hope that the coming GOP investigations will alienate more voters than they alarm. Several Democratic strategists told me they believe that the focus on so many conservative causes will both spotlight the most extreme Trump-aligned voices in the Republican caucus, such as Jordan and Greene, and strike swing voters as a distraction from their kitchen-table concerns.

Leslie Dach, a veteran Democratic communications strategist now serving as a senior adviser to the Congressional Integrity Project, a group mobilizing to respond to the investigations, told me the GOP inquiries will inexorably identify the party with the same polarizing style of Trump-like politics that voters just repudiated in states such as Michigan, Pennsylvania, and Arizona. “We saw in this election that voters reject the Trump playbook and MAGA politics, but that is exactly what they will see in these hearings,” he said.

Congressional investigations always carry the risk of disclosures that could hurt or embarrass Biden and other officials. And whatever they find, investigations also promise to divert significant amounts of the administration’s time and energy. The White House has already staffed up a unit in the counsel’s office dedicated to responding to the inquiries. Cabinet departments are scrambling to do the same.

Recognizing the potential political risk, several Republican representatives newly elected in Biden districts have already urged their party to move slowly on the probes and instead to prioritize action on economic issues. Their problem is that McCarthy already has given every indication he’s likely to prioritize the demands for maximum confrontation from his caucus’s pro-Trump majority.

“If past is prologue, Kevin McCarthy will fall much on the side of the ruby-red Republican base and the pro-investigation, pro-culture-war side,” Kelly says. “He’s never proven able to stand up to the fringe.” And that means the new members from Biden-leaning districts who have provided the GOP its narrow majority have reason to sweat almost as much as the Biden administration over the swarm of investigations that House Republicans are poised to unleash.